Download PDF What In The Hell Happened?: An intimate look at marriage and relationship with raw honesty. 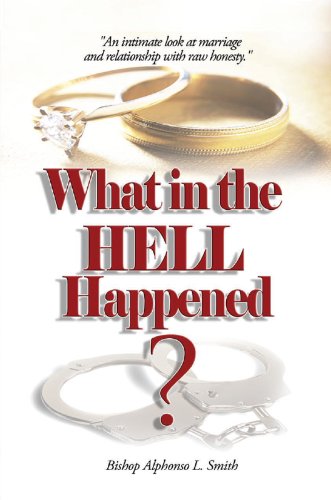 Perel, who grew up in Antwerp as the daughter of Holocaust survivors, got her start as a family therapist, focussing on issues of trauma and cultural conflict. Couples have since become her clinical and theoretical specialty. Can romantic desire truly be sustained? Is infidelity ever a good thing? Last year, Perel gave her fans access to a different side of her work.

The appeal of the show is partly voyeuristic; it is fascinating, not to mention unnerving, to hear other people expose their most intimate feelings and conflicts. It is also educational, poignant, and often profound, a public service in a culture that loves to talk about love, but rarely does so with honesty or humility. My first question has to do with your idea that the couple has never before been such a central unit in our social organization.

Why is that the case?


Because never in the history of family life was the emotional well-being of the couple relevant to the survival of the family. Marriage was a pragmatic institution. And then we added romantic needs to the pairing, the need for belonging and for companionship. We have gone up the Maslow ladder of needs, and now we are bringing our need for self-actualization to the marriage. We keep wanting more. We are asking from one person what once an entire village used to provide. Do you think people are aware of any of this when they go looking for a partner? Marriage is an aggregate of multiple narratives.

It belongs to the people who are in it, but it also belongs to the people who are supporting it and living around it: family, friends, community. As I once said, and it became a kind of a saying for me, when you pick a partner, you pick a story, and then you find yourself in a play you never auditioned for. And that is when the narratives clash. The first thing you can ask yourself, from a cross-cultural point of view, is, Is marriage between two people, in your mind?

Or do you come from, or still live in, a culture in which marriage is between two families? That will inform everything about the boundaries around a relationship. In that time—in the United States, certainly, and in large parts of the world—relationships have changed significantly. We have gay marriage. Women are having children later than ever before.

Technology has become a huge factor in how we look for partners, and then in how we maintain contact with them. What are some themes around relationships that you see at the moment?

We come from a model where relationships, in our village lives, in our communal structures, were very clear. The community gave you your sense of identity. You knew who you were. You knew what was expected of you, and you knew how to behave. You had a lot of certainty, a lot of belonging, zero freedom. And we have urbanized, and we have moved, and we have taken on radical individualism and aspirational materialism, and all of those things have created a playing field in which relationships are undergoing rapid changes.

We have no idea how to handle them. Rules have been replaced by choices. But at the same time we have massive uncertainty and massive self-doubt. Every second book about relationships these days is about belonging and loneliness. You negotiate with your partner about what matters, where you want to live, if you want to have children, how many children do you want to have, if this is the right time to have children.

How can we expect people who have done real wrong to others, in relationships, or in public, or at work, or wherever, to apologize? Something in our society seems to not allow it. The potential admission is too great. Admission and apology are not the same. There are two justice systems, right? One is focussed on healing.

One is focussed on punishment and vengeance. You describe the facts and you leave the other person the freedom to decide what they want to do with it. You own your wrongdoing. In terms of healing, what we do know is that pain is universal, but the meaning that we give to our pain, and the way we narrate our pain, is highly cultural and contextual.

And there is nothing that helps us deal better with those experiences than our connections with others.

Social connection is the No. And communities that come together naturally will provide that kind of buffer. What makes the trauma worse is not the event itself. I know it professionally, but I also know it through my own personal life. I mean, I grew up in that experience. I watched it every day. All Belgian Jews were deported, sixty thousand of them. A few thousand kids got saved by being hidden. After the war, the entire Jewish community of Belgium—which at this point amounts to about forty thousand people out of eleven million Belgians—were people who came from the camps, from the woods, from hiding places.

The entire community was a community of survivors. And the community of survivors, worldwide, without any input from psychiatrists or psychologists, had gatherings—gatherings for the survivors of camp such-and-such, gatherings for the survivors of village such-and-such, parties, planting of forests, creating life, having children. And that coming together, why is it interesting? So now we had a notion that you could have been perfectly fine before, but a cataclysmic event like this can destroy you, and the only way you can remember a sense of continuity, a sense of purpose, a sense of connection is by gathering with others.

Your parents each were the only survivors in their respective families. What was that like as a child, growing up in that kind of family? What was their marriage like? I happened to be quite lucky. My parents met the day of liberation, on the road.

But she was more educated; he was rather illiterate. So he adored her for life. And it was actually a very nice thing to watch.

But I think the more interesting distinction between my family and other families—and you can extend this to all trauma—is that after this kind of experience, sometimes there are people who are not dead , and sometimes there are people who are alive. Some people survive, and some people thrive again. And then there were the other people who really kind of decided to take life as a vengeance, and to live it at every moment. And I am very lucky in that sense, that I was in a household that veered to that extreme.

You went to study in Israel, and then in the U. And when you got to the U. So you became an American—or started the process of becoming an American—rather unexpectedly. I was interested in issues of immigration and identity very early on. I studied cultural relations and religious identity, the formation of identity. How does it change in terms of voluntary migration or forced migration? And, particularly, with an interest in looking at Jewish identity and how it evolves differently depending on the national context. So I got into studying how relationships shift with big cultural changes.